Poking Fun at the Dictator

The images below are taken from Gaceta Sandinista the official voice of the FSLN in Cuba during the 1970s. The FSLN published the journal out of Cuba and drew heavily on the internationalist sentiments of the Cuban Revolution. Gaceta Sandinista largely reported on the situation in Nicaragua, heralding the achievements of the FSLN and decrying the abuses of the Somoza regime and the United States. Besides its articles and political essays, Gaceta Sandinista featured many cartoons, illustrations, and collages. Images, such as those below, were an important means of conveying the political message of the FSLN, especially in Nicaragua where the illiteracy rate remained over seventy percent during the 1970s. 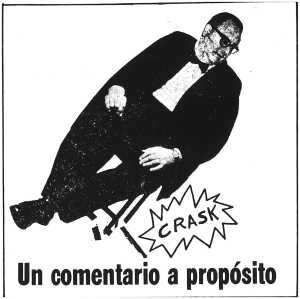 An overweight man, many images in Gaceta Sandinista, such as the one above, mocked Somoza’s girth. The text at the bottom of the image translates as “a comment in respect to,” which is both a comment on Somoza’s faltering regime and a joke about the dictators weight.

The writers of Gaceta Sandinista also used Somoza’s plumpness as a means of highlighting the kleptocratic nature of his regime. Somoza notoriously stole millions of dollars from the people of Nicaragua while at the same time murdering thousands of them. The text reads “Archive of Somocista Corruption” and is the header to a section of the journal dedicated to cataloging the abuses of the Somoza regime. 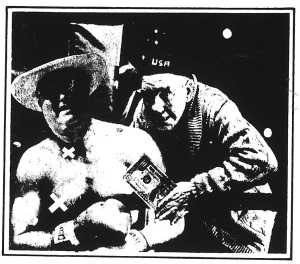 The final image depicts Somoza as Rocky Balboa who is fighting for the dollars of his trainer Mickey Goldman, representing the United States. Although not a complete puppet of the United States, Somoza sought to appease the United States and regularly toed-the-line, knowing that without U.S. support his regime would crumble.

One thought on “Poking Fun at the Dictator”